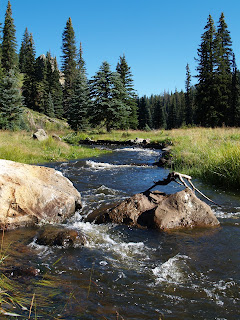 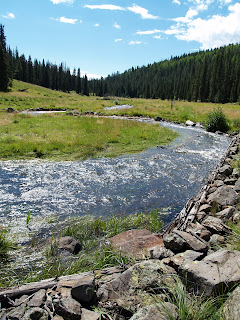 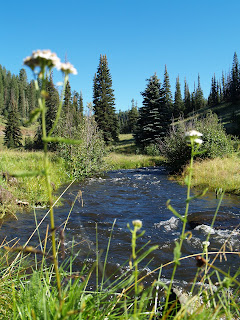 A babbling mountain stream in a pristine alpine meadow makes a welcoming gateway to the Thompson Trail. Never straying far from the water’s edge, the trail parallels the upper reaches of the West Fork of the Black River. The shallow tributary twists and turns through a canyon where soaring basalt walls and massive rough-hewn boulder fields add dramatic flair to the otherwise tranquil landscape. From the trailhead, the path dips into the river gorge. There, lacy curtains of olive-colored moss sway from the conifer canopy above the first of several dams and rock barriers put in place along the stream as part of the Apache trout recovery program. Found only in the streams and lakes of the White Mountains, Arizona’s state fish nearly became extinct due to the damaging effects of invasive species and loss of habitat. Thankfully, the Endangered Species Conservation Act of 1969 initiated a series of co-operative efforts to preserve the rare, speckled fish. The recovery program has been so successful that the Apache trout is now on track to become one of the first indigenous fishes in the United States to be taken off the endangered list. Beyond the dam, the trail heads out through a boggy field that’s alive with waist-high grasses, wildflowers and shrubs. Marked only by hard-to-find stepping-stones, this segment of the trail is a challenge to follow. Yet, the spectacular scenery in this corridor acts as a convenient distraction—so, you’ll hardly notice the route-finding struggle and the fact that you’re sloshing through ankle-deep muck. After that, though, the trail dries out as its crawls through damp thickets of vegetation including hops, raspberries and a spectacular array of mushrooms. Near the end of the trail, at the junction with the West Fork Trail, the roar of swirling rapids marks the turnaround point for the hike. UPDATE: May 2012.  This trail is now open, however there's significant damage from the 2011 WALLOW FIRE. LENGTH: 6.5 miles round-trip RATING: moderate ELEVATION: 8540'-8830'  feet. GETTING THERE: From Eagar, go right (west) on Highway 260 for 2.8 miles to Highway 261. Turn left (south) on Highway 261 and continue for just over 16 miles to Highway 273. Turn right (north) onto Highway 273 and go another 2.1 miles to the turn off for Forest Road 116. Turn left (south) on FR-116 and go 3.5 miles to the signed trailhead on the right. The trail begins at a gate located a short distance down FR-116 on the left. No facilities. No fees.

There was some spotty damage from the Wallow Fire, but a lot of new growth in the damaged areas. Just hiked this one, Aug. 2013, and it's still a beautiful hike.

Thanks for the field report, Adrienne. Glad to hear it's recovering.