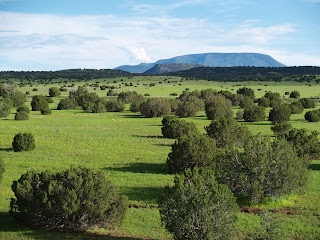 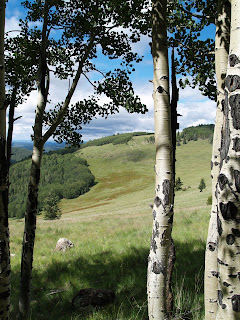 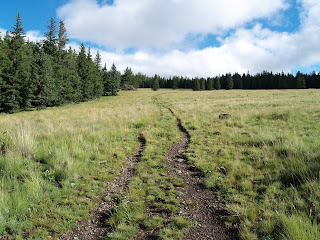 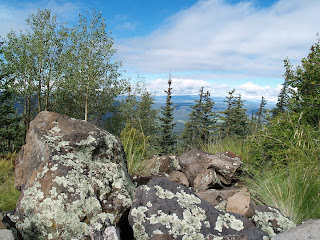 Although this trail is open, it was heavily impacted by June 2011 Wallow Fire.
http://www.inciweb.org/incident/2262/ Because of its extraordinary beauty and historical significance, the path up Escudilla Mountain has been designated a National Recreation Trail. The route doesn’t disappoint and begins living up to its reputation right from the start. Topping out at just under 10,900-feet of elevation, Escudilla Mountain Trail is Arizona’s third highest path– only the Humphreys Peak and Mount Baldy trails are higher. The hike begins in a breezy stand of aspens that crowd the slopes and resemble willowy ladies in feathered hats chattering over tea. Beyond the gateway of aspens, the trail emerges onto high-altitude grasslands flanked by patchworks of mixed-conifer forests and rich green glens ablaze with mountain blue bells and pink thistle. Amid this splendor, lived the last of Arizona’s grizzly bear population. The great predators called this place home until hunters ended their reign upon the mountain over a century ago. Near the summit, (which is home to Arizona’s loftiest fire lookout), the trail gets steeper and enters a shadowy pine forest where spongy mosses and lichens cling to boulders and trees and spew an herbal-musky perfume into the air. Lurking in the midst of it all, are the Southwest’s only Mexican gray wolves. Hunted to near extinction in the last century, Canis lupis baileyi was saved by the reintroduction project administered by Arizona Game & Fish. Since the first wolves were released in 1998, the packs have thrived and grown to several dozen individuals. Today, their territory spans the mountainous ranges on the border of Arizona and New Mexico. Elusive and fleet-of-foot, it’s likely that the only evidence of the wolves you’ll find along White Mountain trails is their distinctive straight-line tracks and a chorus of harmonic howls. Still, the fact that they are “out there” adds to the allure of the area. While grizzly bears are not likely to find their way back to Escudilla Mountain anytime soon—it’s comforting to think that the loss might be mitigated by the return of the wolves to their ancestral homeland. LENGTH: 6 miles round-trip RATING: moderate ELEVATION: 9,500 - 10,877 feet GETTING THERE: From Springerville, go south on Highway191/180 for about 20 miles to Forest Road 56 (between mileposts 420 and 421). Turn left on FR-56 and drive roughly 5 miles to the signed trailhead.
INFO: http://www.fs.usda.gov/wps/portal/fsinternet/!ut/p/c5/04_SB8K8xLLM9MSSzPy8xBz9CP0os3gDfxMDT8MwRydLA1cj72BTSw8jAwgAykeaxcN4jhYG_h4eYX5hPgYwefy6w0H24dcPNgEHcDTQ9_PIz03VL8iNMMgycVQEAIzTHkw!/dl3/d3/L2dJQSEvUUt3QS9ZQnZ3LzZfME80MEkxVkFCOTBFMktTNUJIMjAwMDAwMDA!/?ss=110301&ttype=recarea&recid=45293&actid=50&navtype=BROWSEBYSUBJECT&position=BROWSEBYSUBJECT&navid=110160000000000&pnavid=110000000000000&cid=FSE_003714&pname=Apache-Sitgreaves+National+Forest+-+Escudilla+National+Recreationa+Trail

Did this hike on Saturday the 7th of Aug, 2010. Prettiest hike outside of the GC that I have done. Not a big hiker, but thought this was really cool. I would recommend this highly. Hope you enjoy this when you get a chance. The views are remarkable. A bit surprised that I didn't see any elk or deer.

Did this hike on Saturday the 7th of Aug, 2010. Prettiest hike outside of the GC that I have done. Not a big hiker, but thought this was really cool. I would recommend this highly. Hope you enjoy this when you get a chance. The views are remarkable. A bit surprised that I didn't see any elk or deer.