The town of Payson at the base of the Mogollon Rim is a hiking hot spot with a diverse collection of trails. From creekside rambles (Horton Creek), grueling ascents (See Canyon), pine forest rambles (Highline Trail) and high desert cypress-and-boulder-centric paths of the Payson Area Trails System, there’s something for trekkers of every level. But if you want to hike outside the box; seek out the Payson Packers. The hiking group is a loose-knit, motley band of year-round and seasonal residents with a repertoire of classic and under-the-radar treks.
They’ve been exploring around Rim Country and beyond for nearly 40 years.
“There are probably about fifty or sixty folks who hike regularly with the Packers,” says Randy Cockrell who leads weekly hikes for the group.  The club’s 250 or so members communicate and plan hikes through an email chain. Even though there’s no club website, it’s not too difficult to find somebody who knows somebody on social media or hiker forums who can get you on the Packer hike invite list.
One of the Packer’s favorite excursions is a hike to the Spanish Ruins, an erroneously-credited Native American historical site. “It's atop a mesa west of Payson and is a lot of dry-stacked stone walls.  None of the experts can agree as to why the place was built, nor who built it,” Cockrell said.  The combination of sweaty exertion, vivid scenery and historical significance make the trek a perennial club destination. “I’ve been to the ruins about seven times and still enjoy taking friends and family there,” Cockrell shared.  “It’s close to town and a great spot for taking cool photos.”
The adventure begins with an 11-mile drive from town that dead-ends at the Doll Baby trailhead in the Mazatzal Wilderness. From the trailhead gate, the destination appears as a sheer, red-tinged plateau. Although it’s just under two miles to the top, the hike is a steep, slippery slog. To get to the prize, pass the gate at the wilderness sign and begin hiking uphill on the dirt road.  Between gasping for breath and watching your step on the rocky treadway, be sure to look up occasionally to take in views of the cottonwood-lined course of the East Verde River and surrounding juniper-fleeced peaks. At the 1.4-mile point, go through a barbed wire gate (leave it as you found it) and pick up the narrow footpath on the left.  The next quarter mile plows abruptly uphill through manzanita and wiry scrub to a vertical cliff face where you’ll encounter two boulder obstacles that require hand-over-foot climbs to reach the summit.  From the mesa’s precipitous ledges, 360-degree views coupled with the kind of rush only dizzying, exposed heights can deliver are the hard-earned ROI.  To find the ruins, hike 0.1-mile south among ocotillo and insidious tangles of pants-grabbing cat claw and the haunting images of head-high stacked walls soon appear.
Although the history of the U-shaped complex is not known for sure, archeologists are certain that it’s not Spanish in origin.  The intricate fortress-like structure was likely built by Native Americans sometime before the 1400s.  With its eastern walls creeping up to a 500-foot drop off and the west side planted into the foothills of the Mazatzal Mountains above water-scoured basins, the purpose of the multi-room structure is a mystery. Jutting from the western wall is a roughly 7-foot-high upright monolith that strikes an arresting profile on the lichen-encrusted fortification. Whether the massive block was part of astronomical, protective, ceremonial or artistic endeavors, the deliberately-placed stone keeps its secrets close.   While visiting here, it’s important to remember that even though the site is well known and frequently visited, you’re walking within an irreplaceable heritage treasure.  Avoid touching, climb on or altering the precious artifacts. Nothing needs “fixing” here---leave everything as is.  To gain a deeper appreciation of the architectural ingenuity, look closely at how the walls were designed. Ancient, mortar-free technology used the art of cleaver rock stacking and the holding power of gravity to construct the walls that have remained intact for centuries.   South of the complex, a series of metates (grinding holes) worn into an oblong boulder whisper of human presence. The metates are situated at the mouth of a shallow cave and natural shelter of limestone overhangs that resemble layered pancakes.  Across the valley, you can see the zig zagging line of the Red Hills Passage of the Arizona Trail. The remote and challenging route trickles off the slopes down to the East Verde River and LF Ranch which offers bunkhouse style accommodations for hikers.  From a niche in the wall near the monolith, the respite ranch with its known history and obvious purpose appears as a couple of dots near the river at the end of a twisting road. 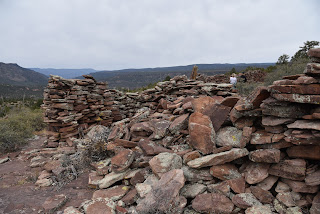 LENGTH: 4 miles roundtrip
RATING: difficult
ELEVATION: 3360 – 4080 feet
GETTING THERE:
From State Route 87 and Main Street in Payson, drive 10.9 miles west on Main and park at the Doll Baby trailhead. Main Street becomes Forest Road 406/ Doll Baby Ranch Road that’s mostly paved up to the 9-mile point.  There are a few rough, deeply rutted spots that require a high-clearance vehicle. The road gets very muddy and should be avoided when wet.