When confronted with a befuddling trail junction, many hikers opt to bypass the unknown and follow their researched route. In most cases, that’s a smart move. Sticking to plans and designated trails reduces the risk of getting lost and injured.  But while even long-established paths can be fraught with challenges, some forks in the road can be low risk diversions that are too sweet to ignore.   You’ll experience both elements on this two-part trek near Sedona.
The recently re-located and documented Chavez Road has a captivating history as a prehistoric trade route, mule and oxen trail and freight transit system for Verde Valley pioneers. The steep, rough-cut road was an important travel route until 20th century railroads and the General Crook Trail provided safer, more efficient means of transportation.  By the 1920s, the abandoned route began to melt into oblivion, succumbing to neglect and encroaching vegetation.  Recognizing an opportunity for “adaptive re-use”, the forest service took on the exhaustive process of surveying and preserving the historic road for recreational use.  The 9-mile section that runs between State Route 179 south of Sedona and the Stoneman Lake interchange off Interstate 17 has been identified, marked with carins (rock stacks) and opened to non-motorized travel.  The entire segment can be hiked via car shuttle, a grueling out-and-back hike or sampled as an exploratory day trek.  Although starting on the upper , I-17 trailhead for a downhill hike sounds like a no-brainer, this choice trades avoidance of strenuous climbs for  serious route-finding obstacles. Hikers must have a keen sense of direction to leap-frog from carin-to-carin to stay on track.  For a less complicated outing, the lower trail offers a tougher climb but a better-defined route.  Beginning at the SR-179 trailhead, hike through the gate and follow the rocky road to the 0.1-mile point where the Chavez Trail veers right at the 9204T sign. The wide road to the left is an add-on surprise for the way back.  From the junction, the route ascends 1000 feet in just under 2 miles among pinion-juniper woodlands on a ragged, edge-hugging road to the top of a mesa with spectacular Red Rock Country and Bradshaw Mountain Views.  This is an ideal turnaround point for a moderate day hike.  Unless you decide to take on the remaining 7 miles of head-scratching hiking, descend back to the 9204T junction and pick up the unsigned road heading north.  This easy-to-follow, 0.8-mile diversion tacks on 400 feet of elevation gain to the hike as it winds its way to Beaverhead Tank. Tucked into a breezy hollow, the secluded, weedy stock pond and a defunct feeding trough at the end of a road less travelled sees few visitors other than roaming cattle and chipping parades of quail. 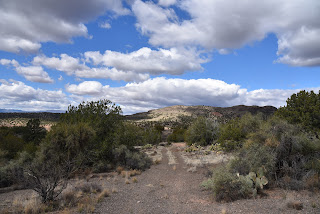 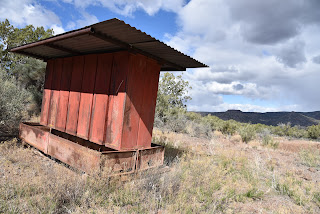 GETTING THERE:
Lower Trailhead:
From Interstate 17 take exit 298 for Sedona/Oak Creek head 3.4 miles west on State Route 179 to just past milepost 302. Turn right onto an unsigned dirt parking circle on the right.  If you reach the Welcome to Red Rock Scenic Byway monument at Dry Beaver Creek, you’ve gone 0.2-mile too far.  The hike begins at the gate marked 9204S.
Upper Trailhead:
From Interstate 17, take Stoneman Lake exit 306 and follow Stoneman Lake Road (Forest Road 213) to the trailhead on the left.
Map & History
http://www.sedonaredrocktrails.org/ROGS/Chavez.pdf