Secluded canyon on the Mogollon Rim 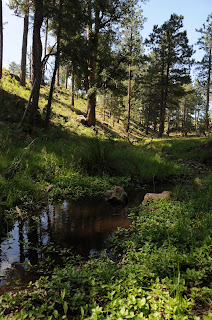 At some point in history, somebody must have emerged from this canyon with a dirty neck.  Whether it was a shepherd or a reclusive homesteader, a case of ring-around-the-collar would have been a small price to pay to live and work in this paradise on the Mogollon Rim. Although it's shown on forest maps, there's no official hiking trail through the shallow canyon.  The route briefly follows a two-track road that merges with footpaths and game trails before being swallowed up in organic mass leaving trekkers to rely on creative bushwhacking to get through.  The landscape diversity here is a wonder.  As the canyon winds north from FR 613 to the Beeline Highway just south of Clint's Well, it cuts through moist fern gullies fed by the trickling waters of Windfall Spring and elegantly swaying thickets of oaks and locusts.  Limestone boulders strewn across a tree-barren, yawning gorge share emerald meadows speckled with blooming wild geraniums, yarrows and clovers where decades of snowfalls and summer rains have soothed the scars of the wildfire that consumed the trees.  Here, the canyon comes to a fork---head right into an unscathed pine forest and the beginning of the muddy boots portion of the hike. Spring water and monsoon runoff settles in ribbony rivulets and tiny reflecting pools at the base of the canyon forming a nourishing foundation for plant and animal survival.  Each footstep releases pungent musty-earthy aromas sometimes spiked with head-clearing jolts of wild mint.  Surrounded by shoulder-high sunflowers a canopy of whispering aspens and life giving waters underfoot, you'll want to breath deep and become absorbed in the moment.
After roughly 1.2 miles of hiking, the first of several natural barriers appears.  This one is a quagmire of logs and brambles choking the creek where the canyon hits a short pinched segment.  Here, you'll need to scramble around on steep banks, which is why long pants and sleeves are recommended for this hike.  As Dirtyneck Canyon's little-known corridor approaches AZ87, the sounds of whizzing motors occult natural woodland murmurs.  A stock tank, bovine grazing field and a flimsy span of barbed wire separating paradise from the asphalt speedway mark the turnaround point. 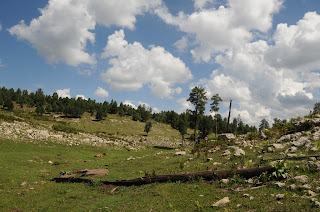 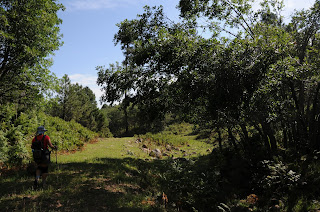