I love snakes. Snakes are great. If it weren't for snakes, rodents would probably be the dominant species on Earth and we'd all be speaking ratish. So, naturally, a trail named Drinking Snake would jump off the map and onto my must do list. But, like many hikers, running into a snake on the trail sends a chill up my spine. One of the biggest concerns I hear from hikers is the fear of snake encounters. Various theories culled from both credible science and the crusty archives of pseudo-psychiatry offer divination into the angst of ophidiophobia. First, there's a global assumption that all humans fear snakes. This has been exploited by therapists and Hollywood alike. For instance, if you say you're not afraid of snakes on the analyst's couch or in a job interview or, you may be pegged as a liar. Then there's the movie, Snakes on a Plane with its preposterous restroom viper attack scene. In a more credible arena, scholarly writings suggest that natural selection may have favored those who learned to avoid snakes. Basically, people who ran lived to reproduce and go hiking. This idea is supported by reports of lunkheads who pick up rattlesnakes for ill-fated photo ops. 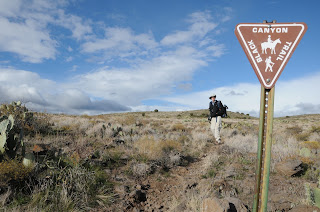 After the initial snake encounter adrenaline rush runs its course, it's then possible to appreciate the beauty of serpents and their role in the environment. 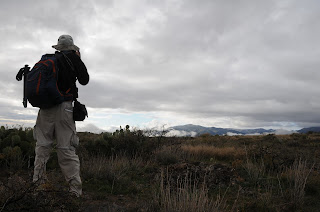 And yes, the Drinking Snake Segment of the Black Canyon Trail is as good a place as any for herpetological hoopla. This 4.8-mile stretch of the 78-mile route that runs from Phoenix to Mayer cuts through foothills and grasslands fed by Big Bug and Antelope Creeks. In addition to transient water, the creeks provide a rich habitat for the tasty critters snakes love. Mice, squirrels, lizards, rabbits, birds and other snakes are all on the menu. But, from a snake's perspective, anything that's not food (hikers, dogs, livestock) is a waste of venom. Trekkers who are aware of their surroundings and give serpents their space are in little danger. Although there are rattlers along this trail, you're more likely to run into innocuous species like garter, king and gopher snakes. Additionally, the vipers are less active in cold weather which is also the best time to hike this exposed route. The hike begins with a walk on Forest Road 9218A where you'll pass a gate then turn left where the road splits at the 0.3-mile point. After another 0.3-mile, the trail becomes a singletrack and continues 2.4 miles to a scenic windmill and water tank above Dripping Spring Canyon. From here, you're back on a Jeep road for the final 1.8-mile haul to the Antelope Creek Segment.