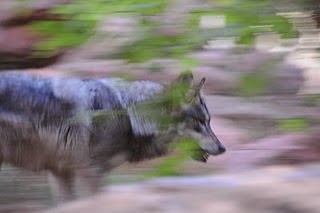 No, that "wolf" you saw in South Mountain Park, Phoenix was probably a coyote. This is an easy assumption because Arizona wolves are rare and live in remote areas far from cities.
Hunted to near extinction in the last century,  reintroduction of Mexican Grey Wolves into east-central Arizona's Apache-Sitgreaves National Forests began in 1998.  Since then, the population  has grown to 13 packs consisting of 46 animals with functional radio collars and 5 single wolves. Both revered and reviled, the beasts roam mainly in the Blue Range Primitive Area near the New Mexico border. The recovery area includes many terrific White Mountains hiking trails and although wolves are generally not a threat to people, it's a good idea to know where the packs roam and how to handle an encounter. Back in 2006, I was lucky enough to spot a wolf while hiking in the Blue. The animal darted across the trail several yards ahead of me, then went behind a tree and froze. I froze too. While I tried to quietly get my camera, the beast peeked at me, tail twitching, giving me a good enough look at its face to determine that ,yes, this was a wolf, not a coyote. The wolf appeared frightened as he/she seemed to weigh escape options before bolting off into the forest. It was a moment I'll never forget! AZ Game & Fish has just posted a wolf project update on their website. There's lots of good information about the program and telemetry flight locations of the packs.