An "upside down" river ramble

Tucked between  US60 and  BNSF railroad tracks on the outskirts of Wickenburg, an enchanting forest thrives in a rare riraprian corridor of an "upside down" river. Like many desert waterways, the Hassayampa River--which runs 100 miles from Prescott to the Gila River southwest of Buckeye--flows underground except in only a few places, thus earning its Yavapai moniker "upside down" river. One place in the river's course  where water flows year-round is The Nature Conservancy's Hassayampa River Preserve. More than two miles of hiking trails wind through this 700+- acre property.  The paths range in difficulty from barrier-free (Palm Lake Trail) to mildly challenging (Lykes Lookout) and each showcases a particular aspect of the site's ecological diversity.  The most wild of the trails is River Ramble  which  wanders along the waterway in a tangle of gigantic cottonwoods and Goodding willows with a carcophony of bird songs drifting through the canopy.  Here, it's easy to spot herons and other water fowl lurking among cattails. Along the muddy banks, a frenzy of racoon, opossum, skunk and fox prints betray the critters skulking in the underbrush.  Other preserve trails focus on endangered mesquite bosques and a spring-fed lake replete with water-loving vegetation.  It's no wonder this place is a magnet for birds both common and rare.  In February, Cedar Waxwings and Yellow-rumped Warblers splatter flicks of lemony color through trees and shrubs.  More common aboreal winged creatures like brilliant scarlet  Northern Cardinals and vociferous Curve-billed Thrashers add familiar sounds to the bird convention.  February is a terrific month for viewing either on your own or as part of a guided tour.  Either way, plan on spending several hours exploring this incredible roadside gem. 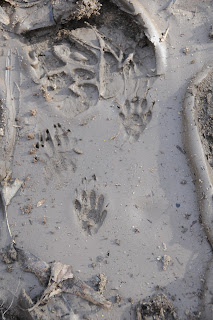