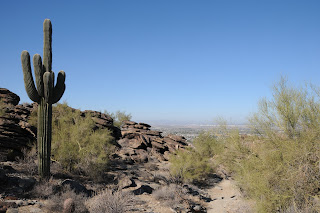 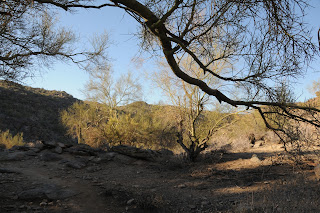 This week, I achived an accidental milestone--I have now hiked every single mile of South Mountain Park official trails. This was never a deliberate "project" of mine---I just sorta realized it while perusing my map collection over the long weekend. The coupe de grace was the Geronimo Trail, one I never got around to  for a really lame reason: it's favored as a downhill mountain biker route.  Bikers like to start at the top of the trail at Buena Vista Lookout parking lot and descend the rocky pitch  at break-neck speeds.  I'm a fan of shared-use, non-motorized trails and enjoy meeting bikers on the trails, but the constant moving aside for racing machines isn't my favorite kind of hike. Certainly, a hike UP would be against the grain, but what better way to check off the sole survivor on my SoMo trail map.  The crux challenge of this hike is its lack of directional signage, so route-finding skills (at the basic "pay attention" level) are required. It starts out as a clear path between two fences at the trailhead and continues 0.1 mile to the official park sign.  That's it for the help.  Beyond the sign, the trail makes its climb over a combination of bare rock, dirt, rock-lined passages  and constructed native stone staircases.  The collection of corrals and buildings near the beginning of the hike are part of the Heard  Scout Pueblo which is private property and off limits to hikers. Sketchy in places, the path seems to get swallowed up  in washes and switchbacks.  Here,  hiker-placed carins and twigs serve as beacons.    Like nearby Mormon Trail, Geronimo features some sweet views of downtown Phoenix and local mountains. Hike it on a clear day, and it's exquisite.  In between,  the route delves into a beautiful slot canyon loaded with desert vegetation. Creosote, palo verde, ironwood, elephant trees, and saguaro cactuses flank the path spiking the air with spicy aromas.  At near the mid point, an optional exploratory  side trip into a gorge of sand and schist (similar to Hidden Valley) offers peeks at Hohokam petroglyphs while adding only 0.5 mile more to the trek. Keeping in sync with the theme of the hike--- don't expect this spur path to be obvious. I was lucky to run into a local man who has been hiking the park almost daily for many years  and he was kind enough to point it out and even gave me a tour, otherwise, I would have trudged right past it in ignorant bliss. (So many nice folks hike and bike in the park!)
And so, after puzzling over a few confusing junctions, I emerged on a crumbly high ridgeline on South Mountain, took in a celebratory deep breath of crisp air,  oogled the views and descended  among the wheeled hordes. 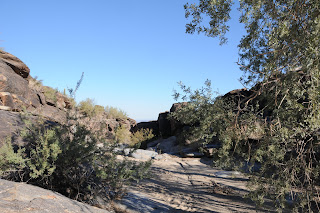 LENGTH: 2.5 miles one way
RATING: moderate (steep, loose footing, route-finding)
ELEVATION: 1,280' - 2,320'
GETTING THERE:
From Phoenix, go south on Central Ave to Baseline Road. Turn left (east) and continue 2.3 miles to 20th Street. Turn right (south) and go 0.8 mile to where the road makes a sharp right turn and becomes Dobbins Road just beyond a roundabout.  This turn is marked by 2 big yellow arrow signs on the left next to a small dirt lot----this is the trailhead, and there's a small "Geronimo Trailhead" sign tucked among the curbside creosote marking the start point of the hike. Parking is very limited, maybe room for 4 cars---do not block private drives.